A few months ago, I wrote a post about my great-grandfather Karl’s evolution as a young artist toward his goal of becoming a Master Craftsman. (You can read it here.)

One of the steps along that path was learning human anatomy. Many years ago, my brother discovered a stack of drawings in my grandfather’s attic, which ended up being a complete set of anatomical drawings that my great-grandfather had completed in art school at the turn of the last century. The drawings were distributed among the family, so I don’t have the complete set, but I do have his drawings of the head, shoulder and arm.

At that time, anatomy was learned by drawing from cadavers, otherwise known as corpses. If you’re a bit squeamish about dissection, this post may not be for you!

First up is the skeleton and muscles of the head. Here’s the whole drawing. The drawings are in pencil; the paper has yellowed over time, although my scans exaggerate the yellow. The drawings are 11 x 17 inches (28 x 43 cm). 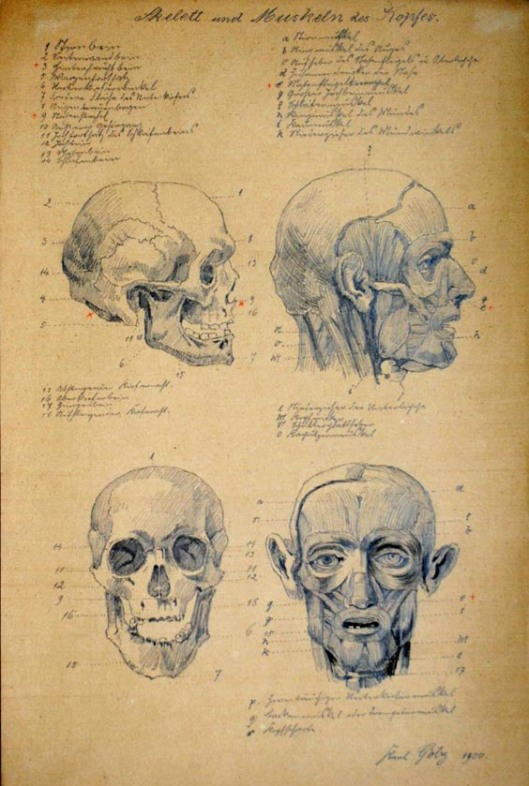 Below is a close up of the top of the sheet. As you can see, specific bones and muscles are named. Numbers are used to designate bones, while letters indicate muscles.

You’ll notice that there are a few red x’s on the drawing. A teacher’s corrections, perhaps?

Here’s a close up view of the bottom of the sheet. The musculature is almost full; only some of the muscles around the mouth have been removed to expose the muscle structure below. As you’ll see in the drawings of the shoulder, muscles are usually removed in layers, in order understand how they work together to create the body’s contours.

These drawings are done with such skill that this is clearly well-reviewed material, the final result of many hours of careful study and practice. Every tiny bump and curve has been carefully yet expertly rendered, without hesitation or erasing.

Now we’ll look at the skeleton and muscles of the shoulder. Below is the full sheet; I’ll explain what you’re looking at in more detail in the close-up shots.

Below on the left is a view of the right shoulder seen from the back of the body. The skin has been removed and two of the first layers of muscle, the trapezius and latiissimus dorsi, are gone, exposing the muscles below. We’re exploring the musculature that attaches your shoulder to your arm.

In the drawing on the right, we’re still looking at exactly the same part of the shoulder, except we’ve removed the deltoid and other muscles, revealing yet another layer of muscle below. We can also see how these muscles bind to the shoulder blade. 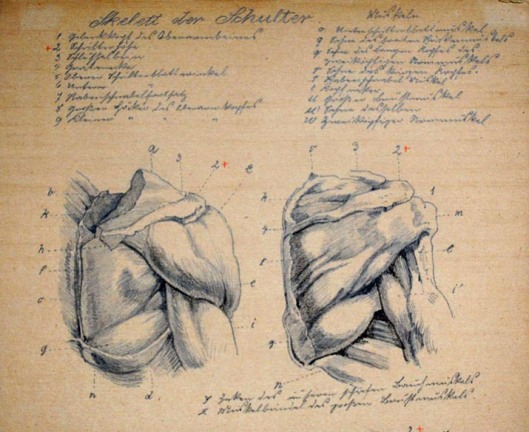 On the right hand drawing below, we’re still looking at the same shoulder. But now almost all of the muscle has been removed and we’re looking directly at the shoulder blade, one muscle layer above its rotator cuff muscles.

In the drawing on the left, we’ve switched to the right arm seen from the front of the body. It’s been lifted to better expose some of the musculature. This is the full musculature, what you would see if the skin were removed, exposing the pectoralis major and minor, the deltoid and biceps and the external obliques arriving from below, with the latissimus dorsi wrapping around slightly from the back. 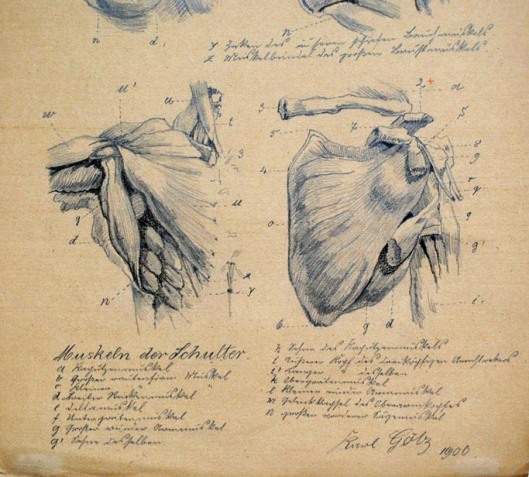 This is the third drawing, titled Skeleton of the Bent Arm, although it’s obviously showing the muscles as well. Those cadavers sure were a muscular bunch!

Here’s a close up of the drawing of the skeleton. Again, look at how simply and confidently this is drawn!

Below is the full musculature as it appears if the skin is removed. The muscles of the forearm have long tendons that attach to the fingers, allowing the fingers, wrist and hand to flex and extend.

As I looked closely at these drawings, figuring out the musculature, I began to wonder how this method of learning anatomy came to be. Why do artists work from cadavers and when did they start doing this?

Artists first began dissecting cadavers to better understand anatomy during the Italian Renaissance, as they struggled to create a more lifelike, sculptural portrayal of the human figure. Opportunities for dissection were very limited due to its strong discouragement by the Catholic church. 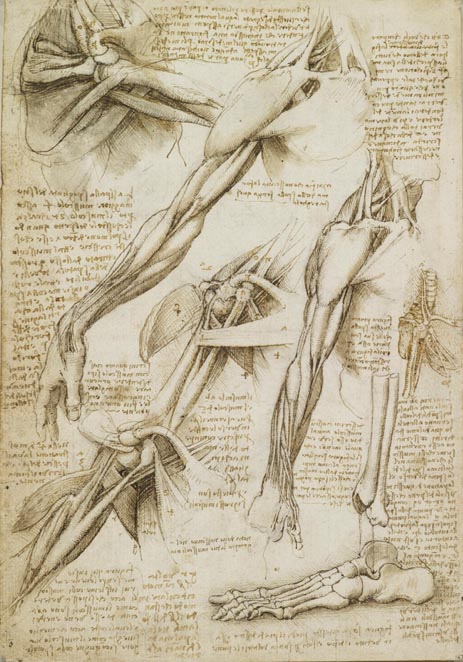 While Leonardo da Vinci (his work is above and below) and Michelangelo, who set new standards in the depiction of human bodies, both dissected cadavers, Da Vinci became the foremost artist/anatomist of all time, dissecting over 30 human cadavers ranging in age from two years old to about 100 years old. He filled 120 notebooks with his anatomical drawings and notes.

Using his knowledge of engineering and mechanics, Da Vinci approached the body as an architect, drawing it in three-dimensional forms shown in plan, section, elevation and perspective, inventing a whole new language of scientific illustration which is still in use today. Beginning in 1489 with drawings of the skull, he produced his most precisely drawn works in 1510-11. Before Da Vinci and his contemporaries, anatomy had barely progressed since the second century.

None of Da Vinci’s medical discoveries regarding the working of the human body were published in his lifetime. However, his methods of illustrating the dissection of muscles in layers (as seen in my great-grandfather’s drawings), as well as some of his plan, section, elevation and perspective techniques, were widely circulated. The first illustrated Renaissance anatomical work, Andreas Vesalius’s “On the Structure of the Human Body,” published in 1543, incorporated Da Vinci’s approach.

Centuries passed before anatomical drawings became accepted as crucial for learning anatomy, although Da Vinci’s breakthroughs eventually became an integral part of how anatomy is taught. Isn’t it interesting to know that even if we learn anatomy today, we’re learning from Leonardo!

11 thoughts on “All in the Family: The Anatomical Drawings”